These two appetizers are both made with one of my favorite things: puff pastry. I love how comforting this diverse ingredient is. With just one box of it I was able to make almost a dozen of both the savory pierogis and sweet turnovers. The last time I worked with it was at the beginning of my MasterChef Junior Cookbook cook-through when I made the most tasty Salmon En Croute (salmon wrapped in puff pastry). This was a great reminder that when I start doing my own recipes full time, I want to experiment with puff pasty as much as possible.

Okay, these were fire (as the cool kids say). I wish I hadn’t put these off, because I’m sure I would have made them many times by now. I was super intimidated by them, probably because they are a dessert (even though it was classified under the appetizer section). Thankfully, they were actually very simple. The mango compote was perfect and the flaky puff pastry was heavenly. I inhaled three of them in the blink of an eye.

This plate is my latest obsession from kendalldavisclay.com She is a local DFW artist whom I met at a farmers’ market. If you love supporting small businesses, check out her website or IG.

I had never heard of pierogi before and of course, there was no picture in the MasterChef Junior Cookbook. After a quick Google search, I learned they are essentially European dumplings. They can be sweet or savory, but Jack from season one decided to go savory. I think the hero of this dish was the mushroom sauce. It called for demi-glaze, which is not a cheap ingredient, but boy was it tasty. I found the pierogis themselves to be a little underwhelming. I’d like to try them again but with some more seasonings and fresh herbs than this MCJ recipe called for.

While I liked one recipe more than the other, I truly enjoyed making both of these MasterChef Junior appetizers. In fact, I’m gonna go eat the leftovers right now.

All my love,
Dani a big tid

This Is Gonna Be Fun.

Make sure to subscribe so you don’t miss out on any of the good stuff–growth + successes, failure + flops, and all honest moments in between! 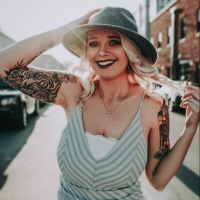 I've known I didn't want to grow up since I was a toddler. However, I haven't been able to get past the second star on the right and make it to Neverland (yet), so here I am: an adult. Nevertheless, I fully believe in letting your inner kid (or as I used to pronounce it, tid) shine in everything you do, even cooking. But I must say, one bonus of growing up is getting to enjoy adult beverages ;) So here you will find a mixture of food and drink inspired by childhood in many different ways. I hope you like a good throwback. Subscribe below so you never miss a moment of nostalgia.